KiKi ARCHi’s recently renovated Anna Garden is a minimalist and materially-pure guest house that emerges from within a cascading landscape, in response to the site’s rugged and idyllic natural context. Located in the countryside of the Changping District, 30km north of Beijing, China, the modern guest house is a multi-dimensional space for relaxation, designed to evoke the client’s fond childhood memories of living in the countryside. ‘It seeks not the concrete object of memory, but the memory itself’, states the Japanese architecture studio.

Sited in the serene countryside, Anna Garden is enveloped by rich green mountains and a mirror-like lake which provides a natural noise barrier. The original 1,300㎡ site contains a large courtyard with a 200㎡European-style house, standing in contradiction to its natural setting. This juxtaposition inspired the team to re-establish the relationship between the house and the landform, which includes multiple dimensions such unifying the terrain and the building, the architectural appearance and the surrounding environment, and the function and the living experience. 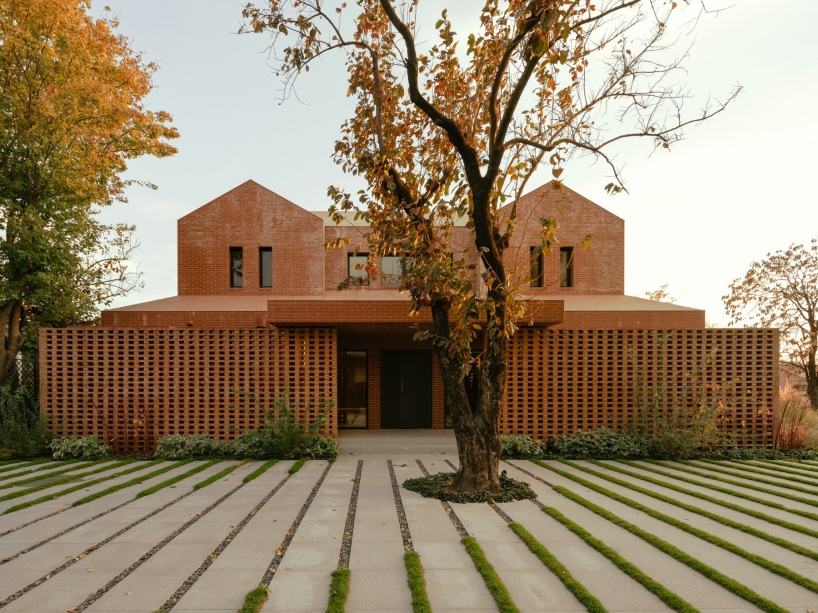 the austere brick facade has been stripped of classical ornamentation

all photography by Eiichi Kano

While redefining the site context and establishing the relationship between the site and structure, KiKi ARCHi fully utilizes the 8m height difference of the site that divides it into two, by linking the garden at the lower level with the house at the higher level through graceful landscape design. This creates a rich visual hierarchy and sets the tone of ‘freedom and nature’ for the whole project. On the north side of the house, a series of stacked, curvilinear terraces that integrate the heavily contoured levels of the site, create several small playgrounds. Meanwhile, on the lower level, a small viewing room and brick pavilion, like two ‘floating islands’, create meeting spaces.

Following the concept of ‘freedom of nature’, topography and vegetation are used to soften the edges of the building and add a wild, free and natural feeling. The architects worked alongside experienced plant design team WILD – SCAPE, on the perspective of environmental analysis, soil improvement, vegetative season, maintenance cost, and other multidimensional aspects. As a result, there are no distinct planting zones or boundaries in the garden, which is permeated with a filed atmosphere. The flower rack at the entrance mimics the herringbone frame, echoing the roof form of the guest house, and a growing vine envelopes the building’s skin like a ‘green shade installation’ and shades the stone pathway below. 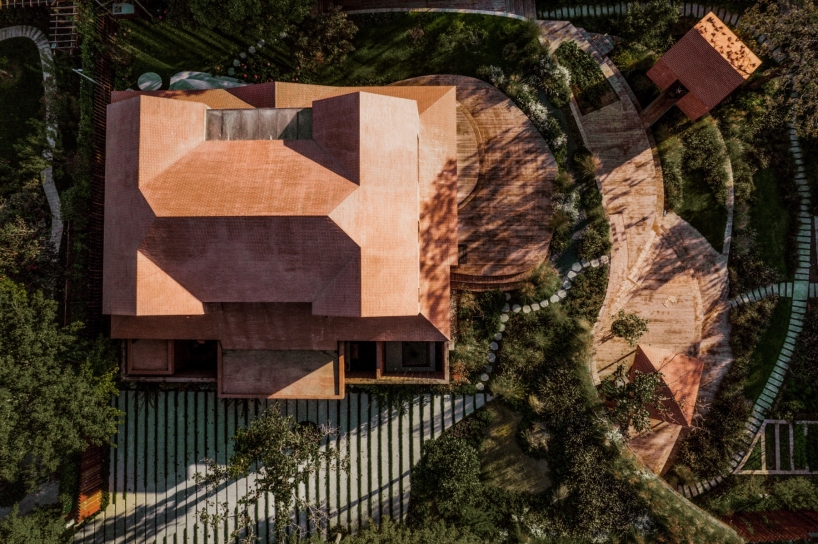 a series of stacked, curvilinear terraces integrate the contoured levels of the site, creating small playgrounds

a materially-pure expression of modernism

In order to retain the original architectural structure re-establish the austere and natural character of the building, the Japanese architecture team completely strips the façade of all European-style ornamentation, replacing it with simple geometric blocks and rustic northern red bricks that echo the raw, rugged character of its surroundings. By removing several of the original classical elements, including overhanging eaves, tiles and ornamented window edges, the house returns to its original form, reflecting a character of sincerity and simplicity. At the east main entrance, the original front porch is hidden behind a hollow brick screen wall, which maximises privacy within the guest house and realizes the semi-outdoor SPA function.

Inside, the first floor is designed as a living area, while the second floor holds private rest spaces. ‘With the minimalist design language, the irregular interspersion of function, structure and material makes the interior space more interesting’, comment the architects. Wood, glass, concrete and red brick elements in both the interior and exterior reflect the rugged natural mountainous surroundings and attribute the structure with an aspect of material purity. Large glass folding doors enclose the existing veranda on the ground floor, maximising the intake of sunlight, create a relaxed living atmosphere and blur the boundary between inside and outside to bring the residents closer to nature. At the same time, the landscaped elements of the staircase in the garden are continued in the interior space. On fully opening the glass doors, the distance between the dining room, living room, teahouse and the outdoors disappears, granting the occupants greater mobility and peace in the space.

‘Now, an ideal house is presented completely with sweet memories and hopes, and the home becomes a multi-dimensional space growing in the countryside. Here, everyone can relax deeply over time, as if in the wilderness, free, full of breathing, honest, and true’, notes KiKi ARCHi. 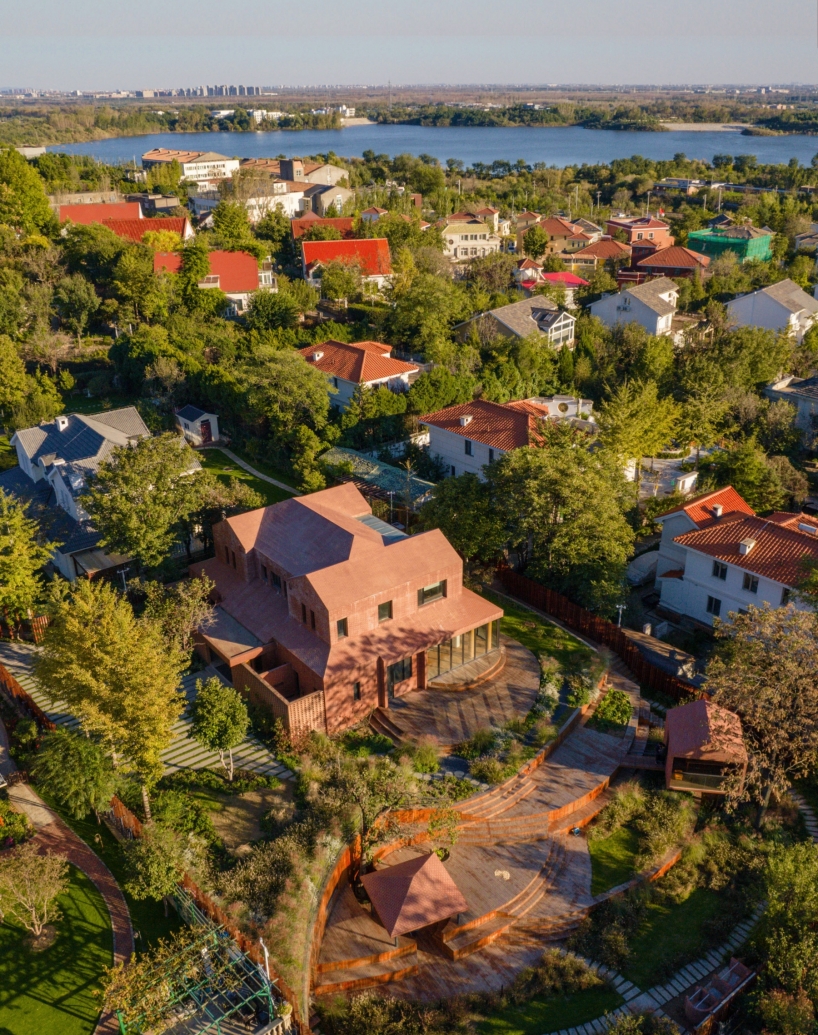 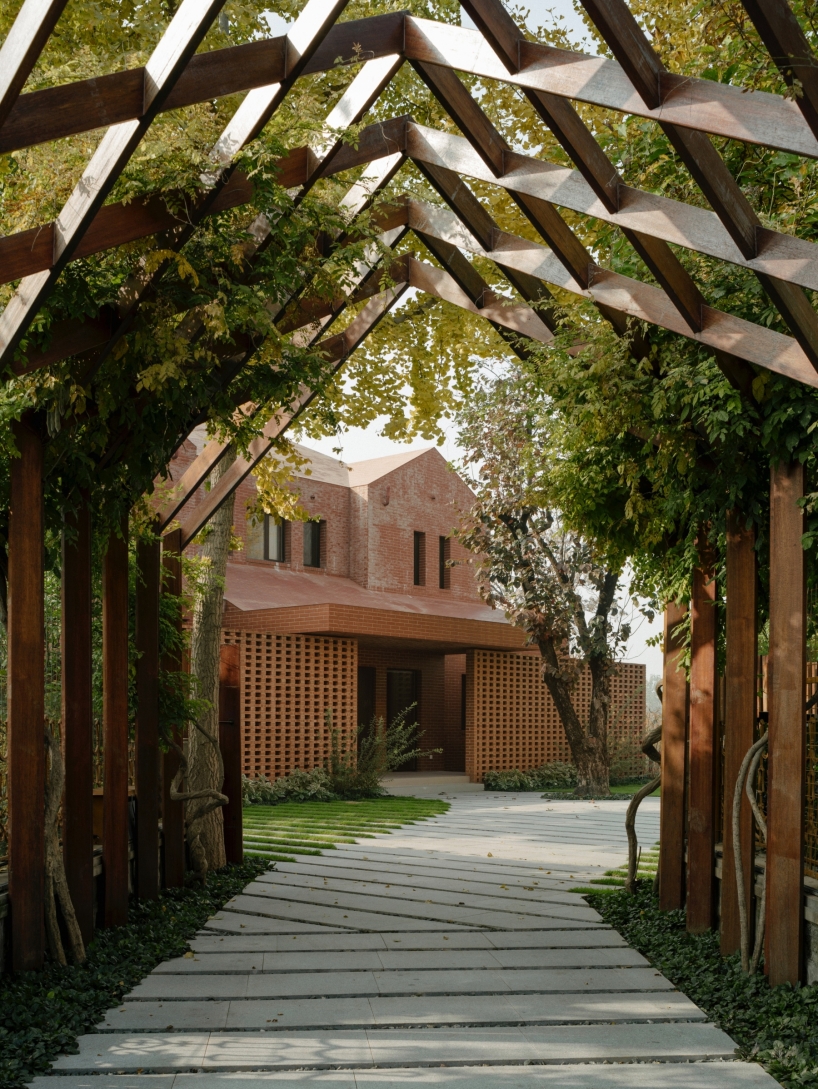 flower rack with herringbone frame at the entrance