On the occasion of Bilbao’s 2022 Gau Zuria (White Night) festival, which coincided with the 722nd jubilee of Bilbao City Foundation, 28 artistic interventions transformed the Basque capital’s urban landscape with captivating installations, and light and sound displays. Among these was Martillo Neumático’s ephemeral Cuerpo Gris (Grey Body), an imposing, inflated installation which winds through and engulfs the courtyard of the 16th-century building that houses the Sacred Art Museum. 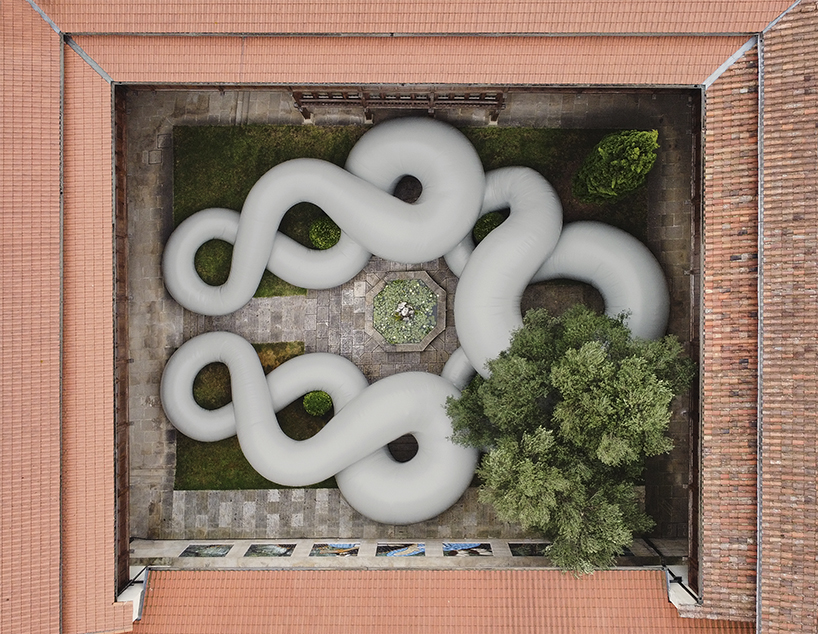 an imposing series of winding routes and cavities

Martillo Neumático, a young Spanish collective whose work seeks to alter the usual dynamics of urban spaces, produce this site-specific intervention that spreads over the central garden of the former Convento de la Encarnación. Within a few minutes, an imposing organic volume, composed of three tangent pieces of variable diameters, which sum more than 120 meters of lineal length and reach a height of up to six meters, was inflated, colonizing the museum cloister. Cuerpo Gris’ continuous, slinky, and soft body follows the main axis of the courtyard, disrupting the arcading verandah’s repetitive language and the carved stones’ rigid tectonic. It unfolds in space, winding between the elements of the garden and encircling the lily fountain which remains as an unaffected central symbolic element. 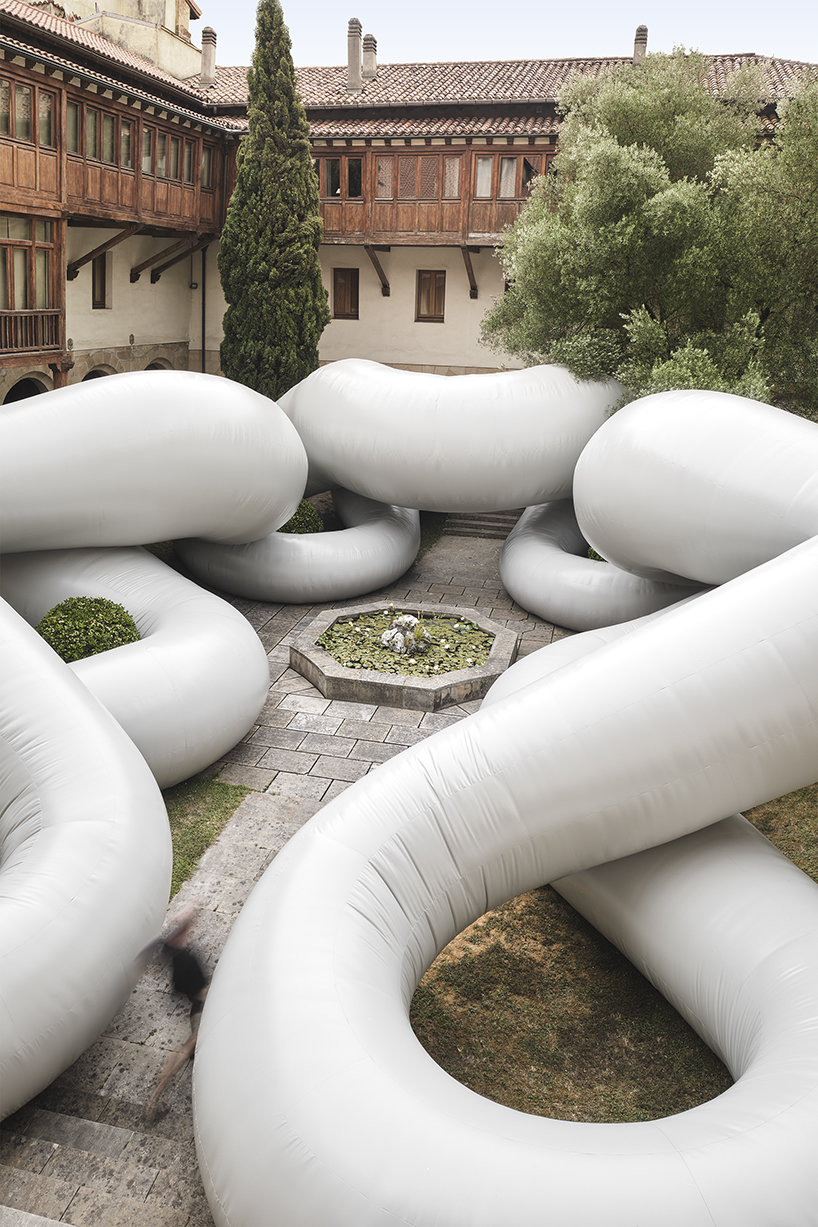 Following a detailed study of the site and a handcrafted production of the patronage, Cuerpo Gris is able to adapt to the cloister’s topography. Rooted in the ground, it ties the boxwood bushes and absorbs the centenary olive tree in its twists.

The experience of the installation’s atmosphere is materialized in a series of routes and cavities that reveal a fragmented vision of the space and play with the visitor. Cuerpo Gris, ‘a monstrous corpse that traps you in its interior and oppresses your gaze’, immobilizes you, rolls you up softly in intimate spaces, expels you and invites you to straddle it. In an immersive experience the monumental scale and appearance confronts the human body with a strange presence which is never entirely revealed. 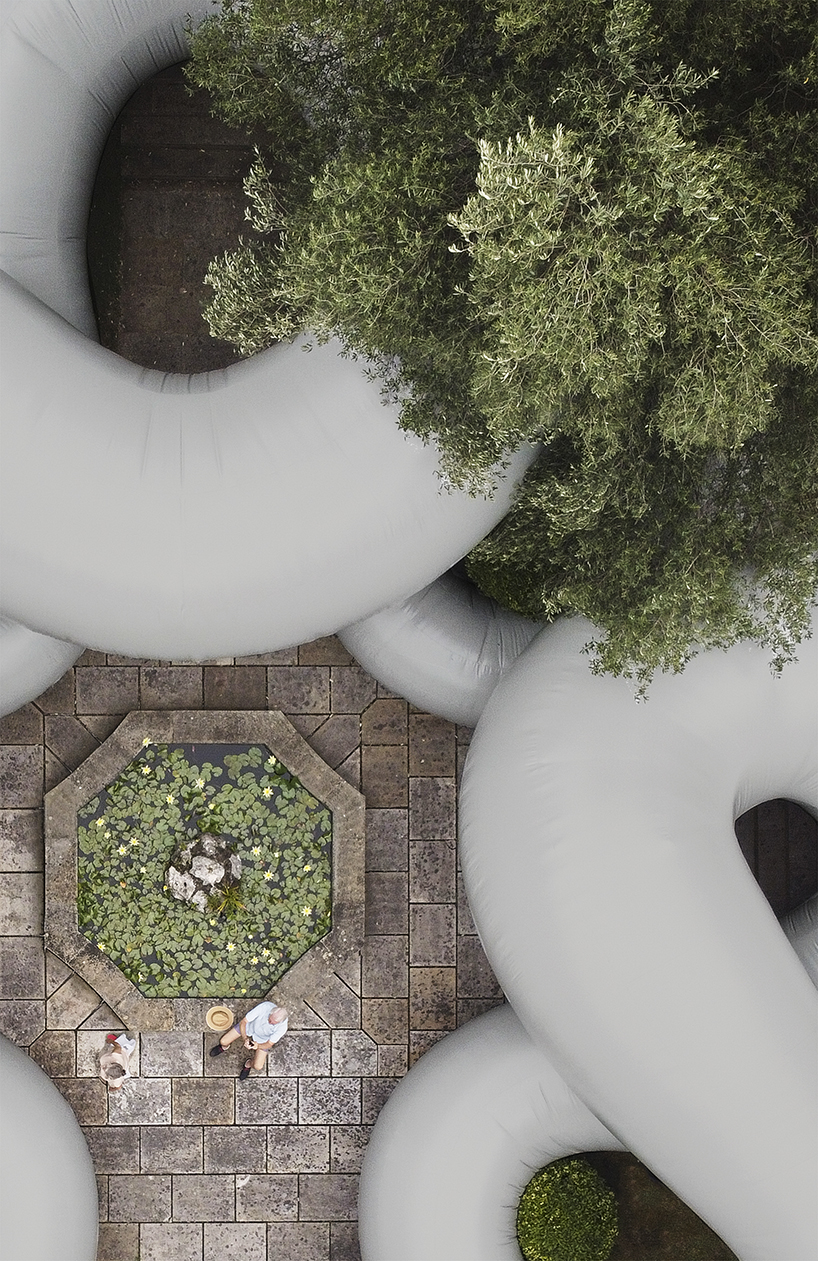