the ‘valley’ unveiled in zuidas

MVRDV takes to Amsterdam‘s Zuidas neighborhood, building its Valley complex comprising three geology-inspired towers. Covered in plant-life and shaped by dramatic, cantivering apartments, the three towers rise 67, 81, and 100 meters (220, 265, and 328 feet) over the city. Additionally programmed with workspaces, retail, and cultural spaces, the tower covers 75,000 square-meters. A ‘green valley’ winds among the three buildings, beginning along the fourth and fifth levels and accessible to all by way of two external stairs. 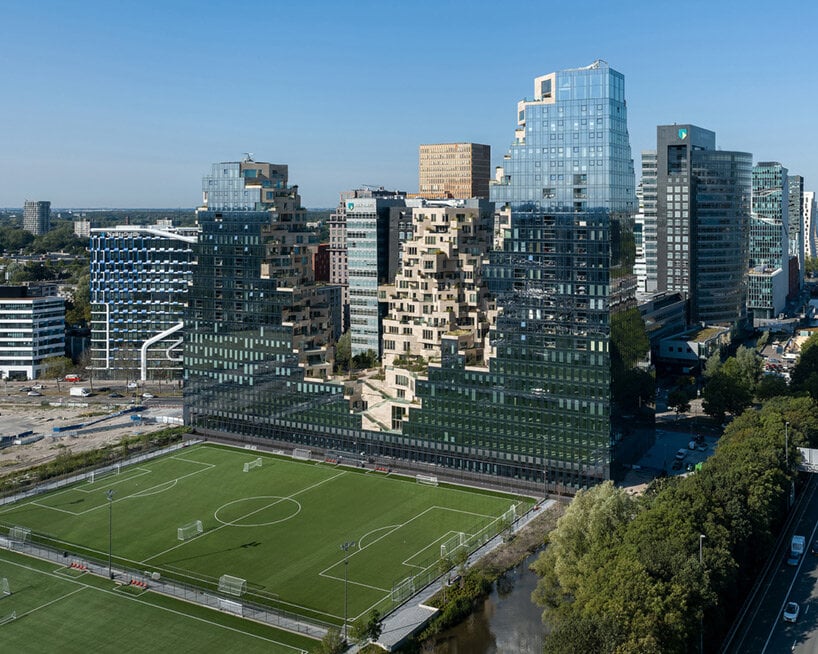 The design team at MVRDV work with landscape architect Piet Oudolf to integrate the Valley’s extensive planting, which includes 13,500 young plants, shrubs, and trees. The team notes: ‘As these mature over the coming years, they will give Valley an increasingly green appearance, making the building a manifesto for a greener city.’ The project aims to return a ‘green and human dimension’ to the cold, office-centric neighborhood of Amsterdam Zuidas.

The Valley is crafted with multiple faces — the outer edges appear as a shell of smooth mirrored glass, integrating into the urban fabric of the business district. Within this shell, an entirely different atmosphere takes on a more inviting natural appearance, suggesting a block of glass which had ‘crumbled away to reveal craggy rock faces inside replete with natural stone and greenery.’ 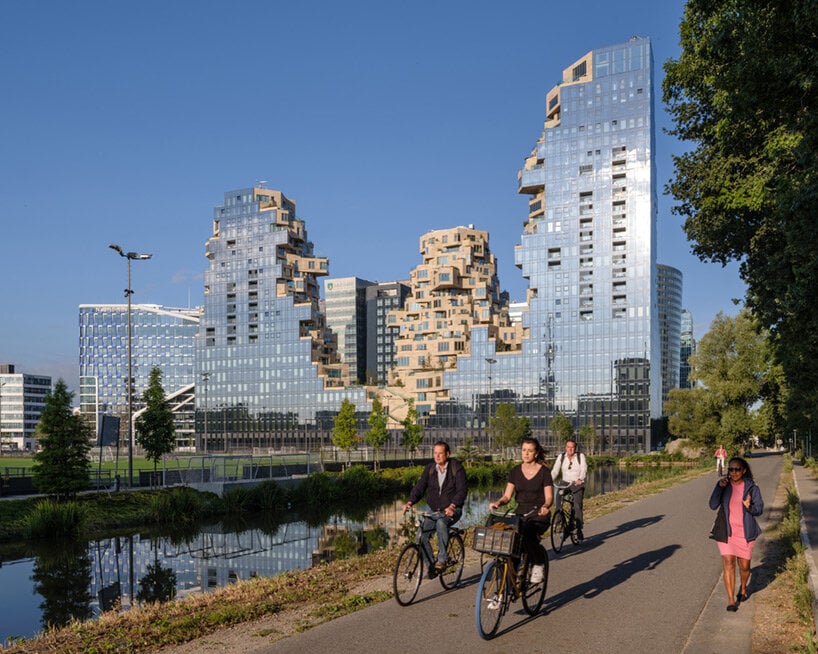 Sweeping views across the city can be captured from many spots throughout the MVRDV-designed Valley, from the 198 apartments — each with a unique floorplan — to the ‘skybar’ at the highest point. The layout of the project is designed to accomodate a mixture of different residents, workers, and visitors. The architects continue: ‘on top of the three-storey underground car park, offices occupy the lower seven floors, with apartments located on the eighth floor and up.

‘Much of the building is open to the public: from the publicly accessible footpath that zig-zags up to the central valley from the street level, to the Grotto, an atrium that forms a covered street on the first floor where the Sapiens Lab — a breeding ground for young scientists — will soon open.

‘The grotto is connected to the outside by two large skylights that double as shallow water pools in the valley level above, and its natural stone flooring, walls, and ceilings — the same stone used on the surfaces of the valley and towers — makes clear that all the public areas of the building are part of the same apparently geological formation.’ 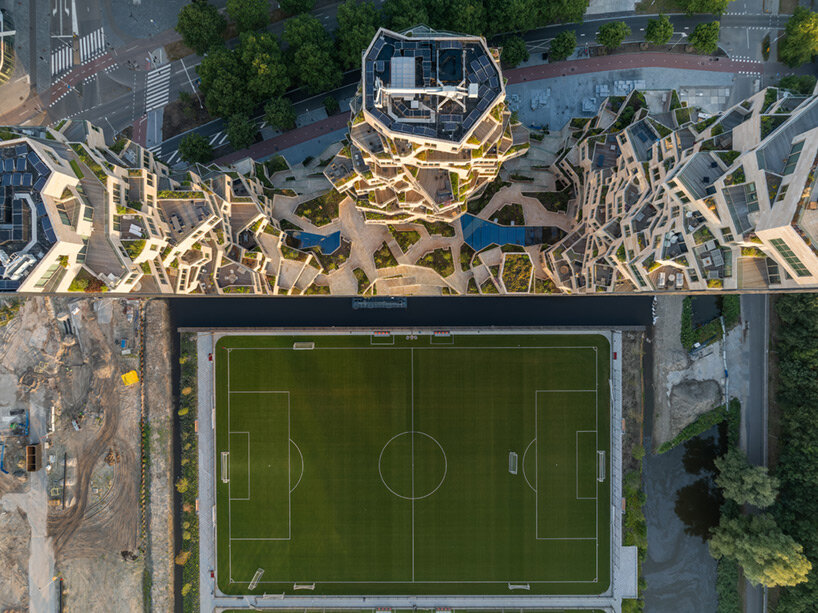 With an utterly bespoke design, MVRDV’s the Valley is fabricated with the use of custom digital tools. These include a tool designed to ensure each apartment receives sunlight and views, to a program that facilitates the ‘apparently random pattern of over 40,000 stone tiles of varying sizes that adorn the building’s façades.’

The unique floor plans of each unit are made possible by the interior designs by Heyligers Architects, while the extreme cantilevers are realized with innovative engineering methods including ‘eleven steel ‘specials’ bolted to the concrete building that take the overall appearance to the next level.’ 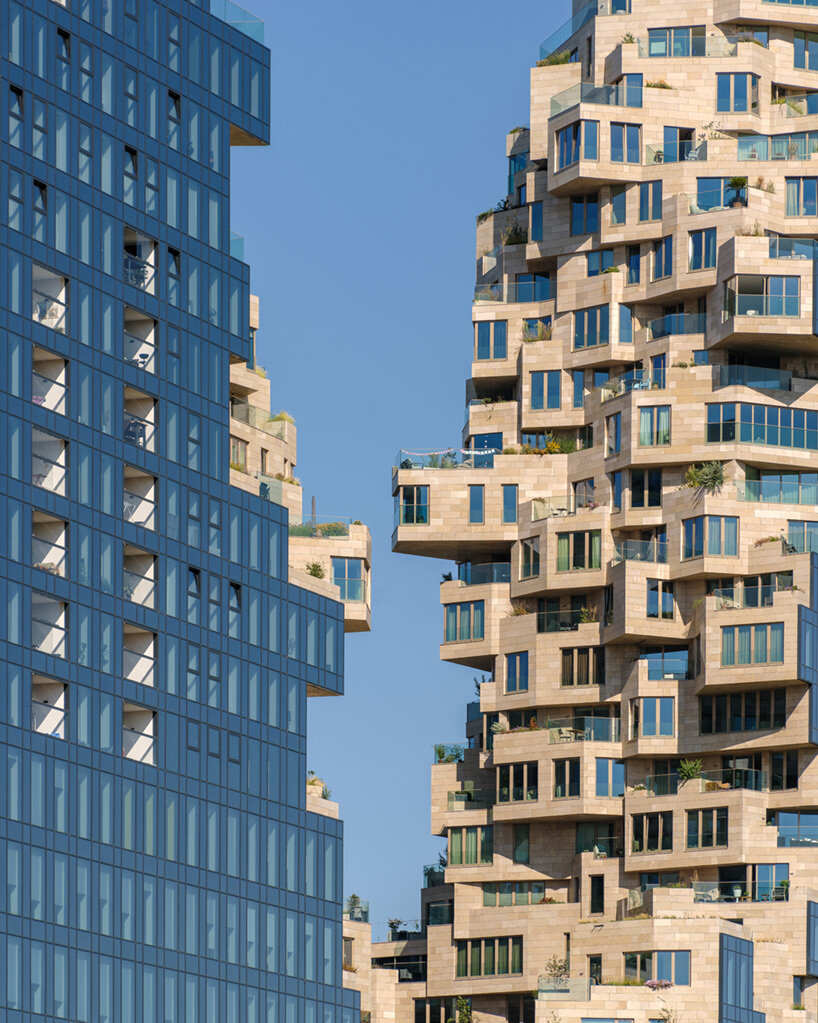 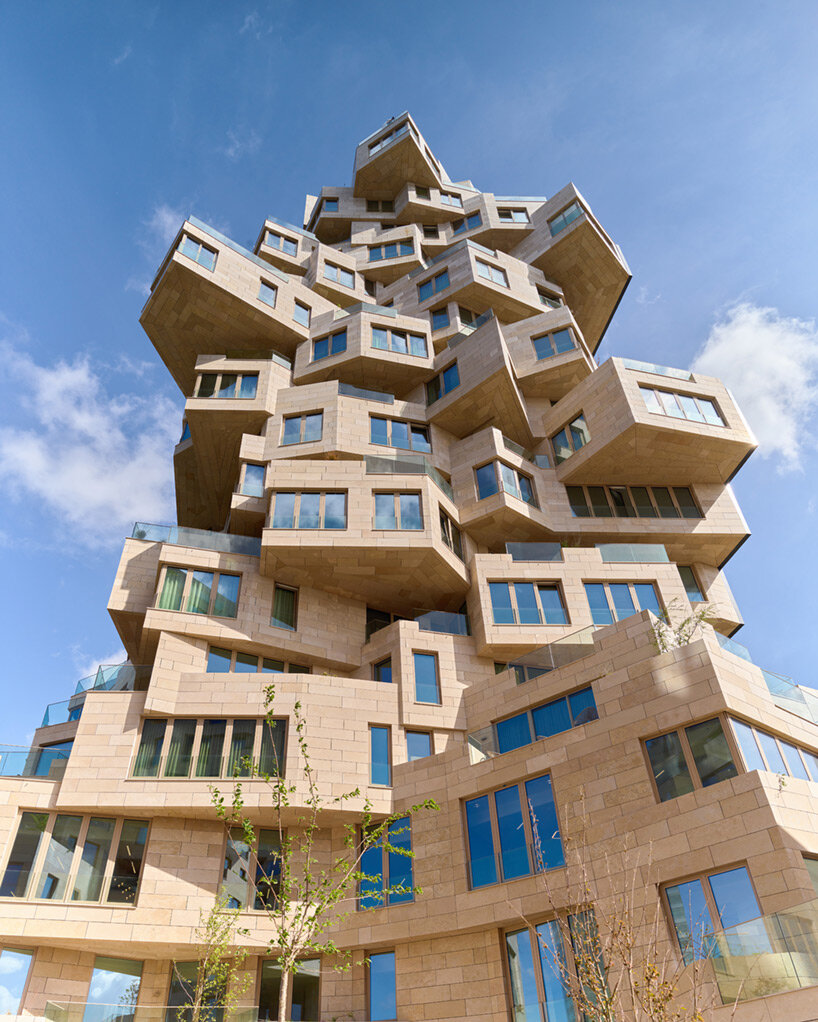