renaissance masterpieces on display in warsaw

From June 21 to September 18, the ‘Botticelli tells a story. Paintings by Renaissance masters from the Accademia Carrara collection’ exhibition designed by NArchitekTURA, will be on display at the Royal Castle in Warsaw, Poland. The exhibition features nine Renaissance masterpieces including works by masters Giovanni Bellini, Vittore Carpaccio, Cosmè Tura, Lorenzo Lotto, Giovanni Battista Moroni and Paolo Veronese. The highlight of the exhibition is Sandro Botticelli’s ‘The Story of Virginia’, representing the late period of the artist’s work. The works, on loan from the Accademia Carrara in Bergamo, together inform a compelling exhibition evoking the spirit of one of the greatest phenomena in the history of European culture – the Renaissance movement.

Notably, NArchitekTURA’s design of the form of the display enhances the striking Renaissance interior of the space, and draws on other works created by Botticelli, including his famous masterpieces ‘The Birth of Venus’ and ‘Primavera’, and his illustrations of Dante’s writings. Lead designer of NArchitekTURA, Bartosz Haduch, comments that ‘Botticelli tells a story’ attempts to create a contemporary architecture that is rooted in three key themes: the unique interior of the space that showcases the exhibition, the specific nature of paintings displayed, and the broader movement of Renaissance art. 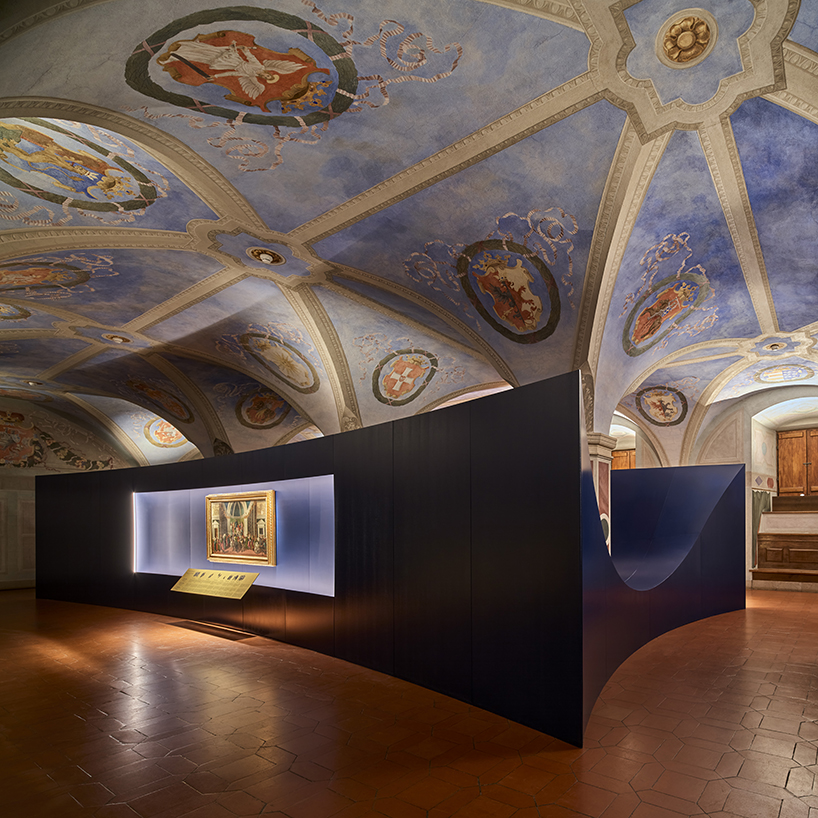 the symmetrical, harmonious geometry of the new structure hints at the ideals of the Renaissance

all images courtesy of Bartosz Haduch

NArchitekTURA’s new temporary exhibition is displayed in the center of the former Chamber of Deputies – the most significant Renaissance interior at the Royal Castle in Warsaw. With a richly decorated hall divided by three free-standing pillars, the chamber’s most spectacular element are its cross vaults featuring the coats of arms of 32 former Polish provinces and lands arranged on an irregular background resembling a blue sky with clouds. This room constitutes a space where the present and history, reality and illusion, architecture and art confront each other. In the center of the exhibition area, Bartosz Haduch inserts a new free-standing concave arch displaying the artworks constitutes a both literal and indirect reflection of the existing ceiling, and forms a negative of the vault above. The symmetrical, harmonious geometry of the new structure interprets the geometries of the Renaissance interior designed by Giovanni Battista Quadro and hints at the ideals of the Renaissance. In transverse views, it creates a somewhat illusory sinusoid merging the contemporary and historical. Its darker navy blue colour mirrors the lighter shade of the existing vault above, and is inspired by a shade of the famous lapis lazuli pigment, and of that used for the crown of the apse in the Botticelli painting displayed in the exhibition.

While the historic ceiling illustrates a daytime view of the sky, NArchitekTURA’s newly designed exhibition suggests the same view, but at night. Reflective, bent surfaces deflect, darken and distort the image of the existing chamber, evoking the historical optical effects seen in both Renaissance art and architecture. The reflective effect dematerializes and defragments the architecture of the Chamber, lending it a new quality while blurring the boundaries between the old and the new. ‘Particularly in two views facing in the direction of the central longitudinal axis, one may get the impression of an illusory sinking of the three existing pillars in a fluid surface resembling the trough between towering waves.’ notes Bartosz Haduch, founder of the design and research group. ‘This is surely one of the exhibition’s most spectacular architectural motifs.’ 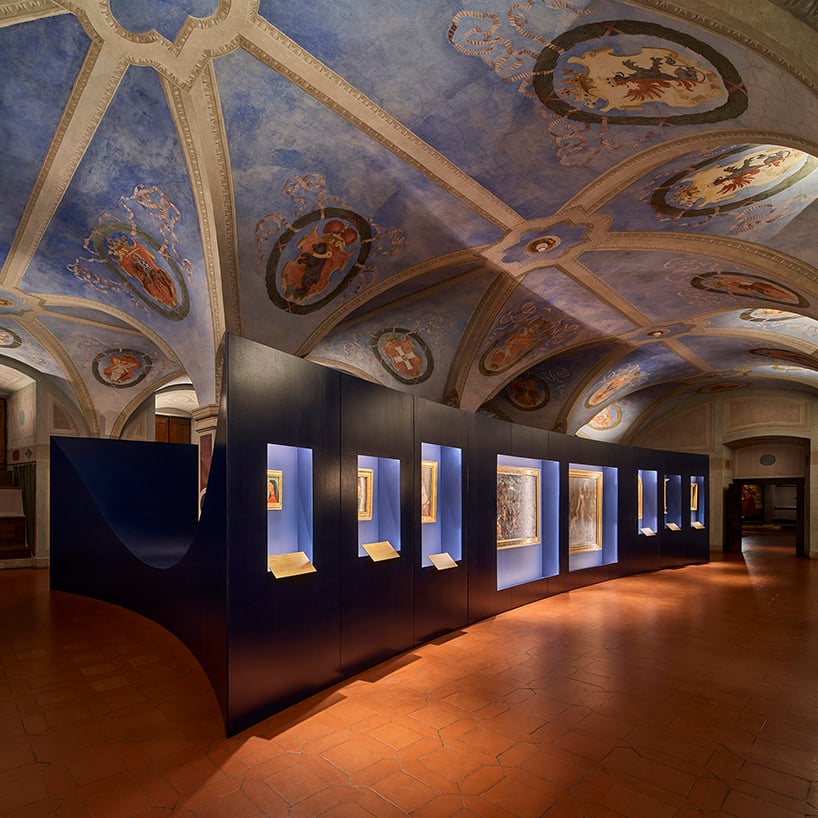 botticelli’s ‘the story of virginia’ is the at the forefront

Individual works of art, not visible from these two axial perspectives, are displayed in recesses with a more neutral matte background. Each lateral edge of the navy blue monolith is slightly concave, inviting viewers in closer to approach closer the paintings. These Renaissance artworks are displayed on opposite sides of the chamber, all illuminated with indirect soft lighting hidden in recessed niches. On one side are eight thematically arranged works by Giovanni Bellini, Cosmè Tura, Vittore Carpaccio, Lorenzo Lotto, Giovanni Battista Moroni, Paolo Veronese, Defendente Ferrari and Jacopo Bassano. Exhibited alone on the other side, is Sandro Botticelli’s ‘The Story of Virginia’, accompanied by an illustrated information board.

NArchitekTURA’s sophisticated play of solids and light, combined with the unique scenography of the Chamber, together create optimal conditions for interacting with the Renaissance masterpieces. The arrangement of all the artefacts along the chamber’s longer walls also provides spectators with benches in the existing window recesses – for calm, undivided and unhurried contemplation of the works. The exhibition is complemented and enhanced by discreet indirect lighting, subdued instrumental music and carefully curated elements of small architecture, graphics and typography. All new elements of visual identification were made of brass, referring to the golden color of the picture frames. Together this creates a holistic vision of the exhibition, based on specific multi-threaded inspiration, but open to various ways of perception and interpretation.