Located 45 minutes away from the city center of Bandung, Indonesia, the Halojae resort hotel by RDMA Design is nestled among a valley of lush woodlands atop an idyllic hill, overlooking the city in the far horizon. The hotel complex comprises a series of lodge-like wooden villas, including the Jiwa Villa and Kasinda Villa, which are designed to offer visitors a tranquil retreat far from the hustle and bustle of urban life. Inherently, the villas are at one with nature, valuing sustainability and forming a deep connection with the landscape that encompass them, as emphasised by RDMA’s minimalist use of natural materials. ‘There is no push or pull, just a flow of mutual understanding between the architecture and natural environment’ note the architects.

The distinct design of the hotel villas, from their materiality to the assembly of rooms and the sequence of the entrance, are strongly influenced by the location. Primarily made using wood, the structures are configured to offer open views of the surrounding greenery, becoming at one with their context while providing guests a serene, private retreat. 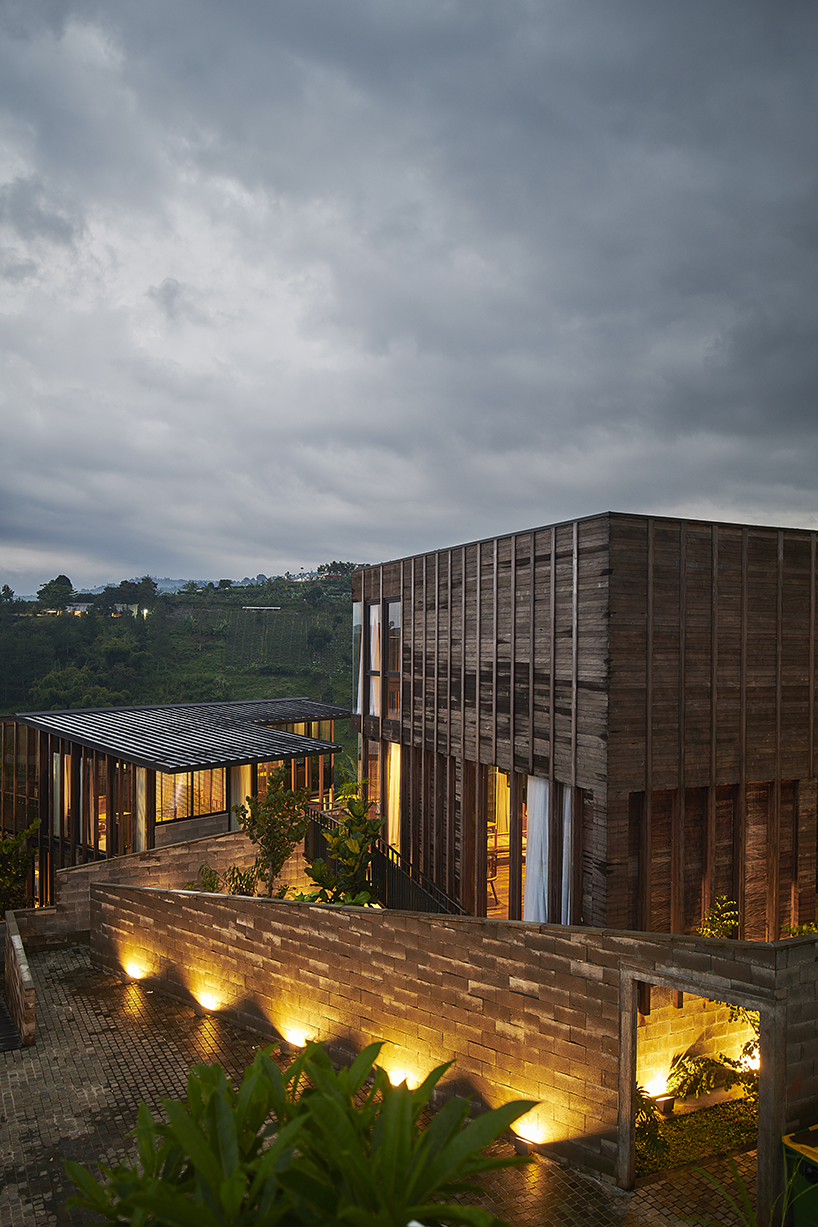 all images courtesy of RDMA

idyllic retreats in the indonesian woodlands

RDMA’s Jiwa Villa offers guests a chance to break away from their daily routines and unwind. Constructed with various species of wood, concrete bricks and black-painted steels, the three-story villa integrates seamlessly with its rich green natural environment. With a flexible design, the villa accommodates three renting scenarios where guests can either book the large studio room on the first floor, rent two junior suites on the third floor along with a living space on the second, or book all three floors at once to accommodate larger groups. As a result, the Indonesian design office develops the sequence of the space to offer two entrances to the villa – a pathway with access to the studio unit on the first floor and a ramp access to the living space and two junior suites on the upper floors.

The studio is connected to the rest of the property via a garden and a perforated metal door, for guests who choose to book the entire villa. To ensure it remains subtly nestled into its natural environment without obstructing the view of the surrounding villas, the first floor is sunken slightly from the entrance’s elevation. Meanwhile, the concrete brick outer walls are tapered gently to one side, following the slopes of the access ramp which provides an accent to the wooden box-shaped structure. It also opens up the view from Jiwa’s second and third floors as well as that of a neighbouring villa.

Inside, RDMA incorporate skylights to maximise natural light exposure, while large windows are carefully positioned to blend indoor with outdoor and allow guests to enjoy the picturesque view of the valley below, the surrounding hills and the cityscape in the distance – all while maintaining their privacy. 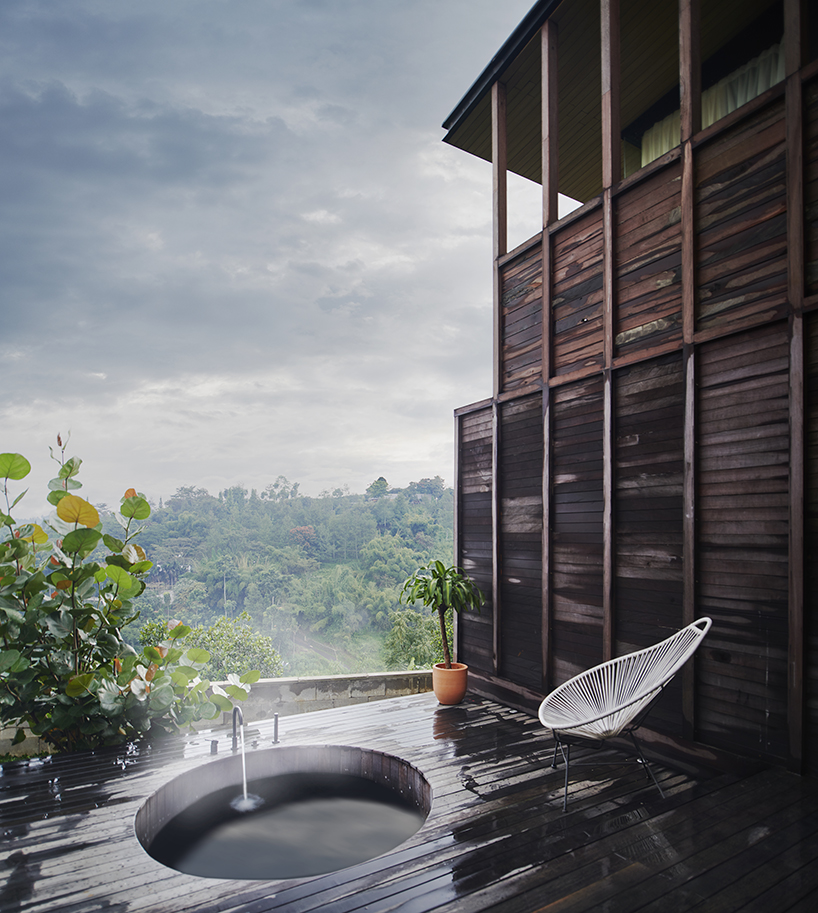 RDMA’s two-story Kasinda villa, configured in a Z shape plan, features two wings with nearly identical floor plans built at an angle relative to the site. In the left wing, the first floor holds one spacious suite and a semi-outdoor jacuzzi, while the second floor holds a living space and a balcony. The right wing, rotated 180 degrees, features an identical floor plan with two junior suites instead of one. The different orientations of the left and the right wings secures guests’ privacy while providing them with their own unique views of the surrounding landscape and the city of Bandung far in the horizon. The two wings can easily be combined into one larger villa for larger groups, connecting on the second floor by four hidden doors that pivot along their center axis. As the villa is part of a larger resort complex, Kasinda’s mass, with its gently sloping roof, is designed to ensure it does not obstruct the view of the villa next door.

Exposed concrete blocks and various species of woods are chosen as the primary material for the villa to blend in with the surrounding woodlands. The colors and textures of the concrete blocks and woods are accented with black painted steels and splashes of white from some of the interior fixtures and details. In a distinct sequence and layout, as guests enter the villa via a ramp which connects the parking space to the bedrooms on the first floor instead of a living space above. 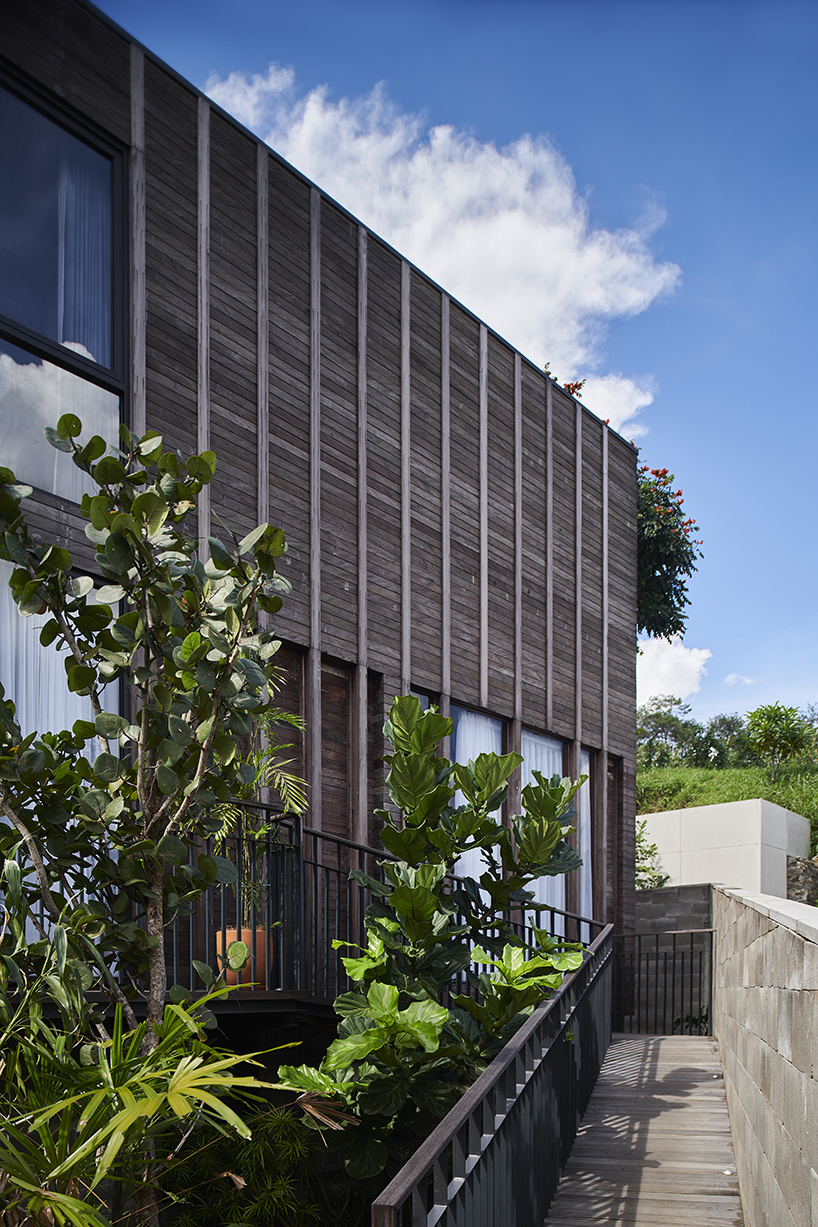