When Samsung originally revealed the 55-inch Odyssey Ark Quantum Mini LED monitor, our immediate reaction was one of amusement and awe. With its 1000R curvature and orientation-adjustable design, the Odyssey Ark’s wildly over the top design seemed like the numerous exploratory exercises revealed at CES – a bold concept that later would see light in some watered down iteration. But lo and behold, Samsung is embracing its original bold vision, delivering to market a monitor so enormous it turns gaming into an IMAX-like experience. 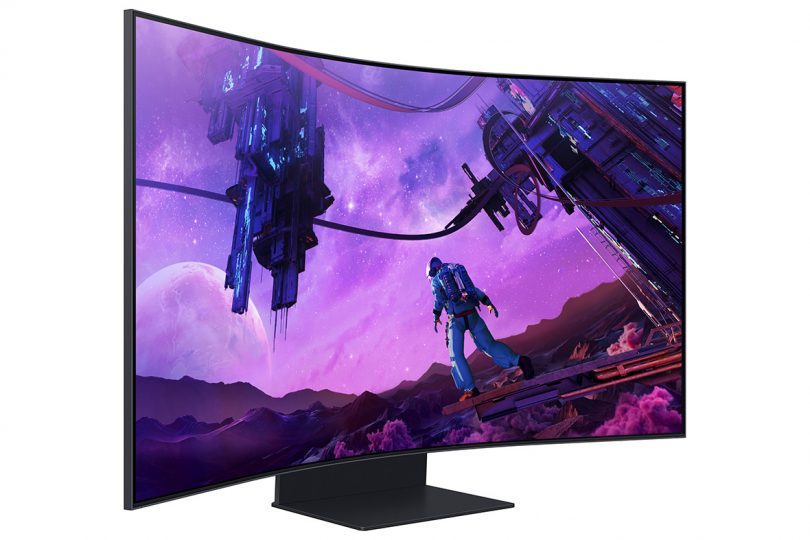 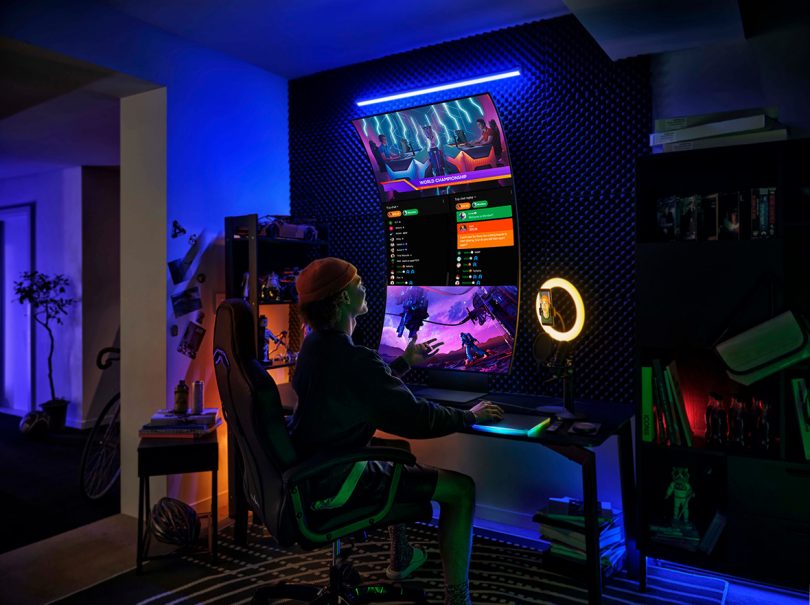 Aimed at fast twitch gamers, the Odyssey Ark is outfitted with a 165hz refresh rate and fast 1ms (GTG) response time. Samsung underlines the Ark isn’t just a fast monitor, but a color accurate one, with a matrix of Quantum Mini LED paired with 14-bit processing, 16,384 black levels, and a million-to-one static contrast ratio.

The Odyssey Ark’s no holds barred effort to immerse gamers into its Quantum Mini LED illuminated embrace benefits from a slew of Samsung’s proprietary technologies intended to make the experience of working in front of a ridiculously large display tenable, including a Matte Display coating, anti-glare, and anti-reflection capability. The biggest wow factor is the monitor’s ability to swivel into a towering vertical orientation, or as Samsung calls it, Cockpit Mode. 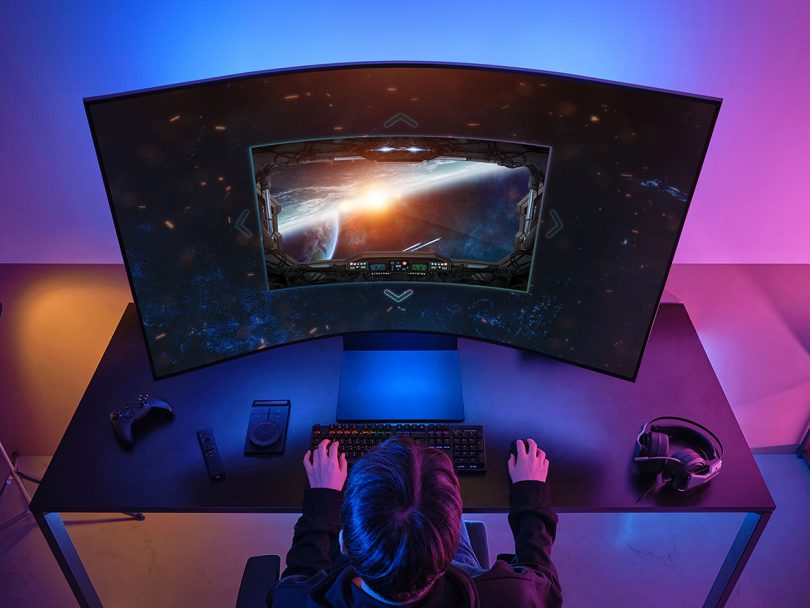 Not content with just visually transporting users into whatever realm of gaming adventure or conflict their heart desires, the Odyssey Ark is also equipped with Sound Dome Technology, the aural-immersive equivalent of the curved design delivered via four speakers at each corner and two central woofers – a 60W 2.2.2 channel configuration that allows gamers to forgo extra speakers (and with a 55-inch monolithic display occupying the footprint and airspace directly in front of you, your desk may be hanging up the equivalent of a “no vacancy” sign anyway). 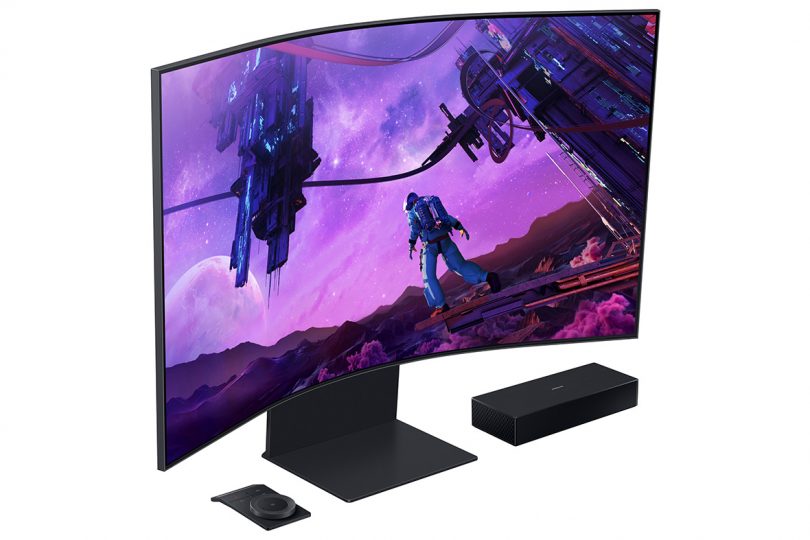 Thankfully Samsung has seen it fit to ship the Odyssey Ark with a Smart Hub, a peripheral already included with some of the brand’s dedicated televisions. The Smart Hub, as its name implies, operates as separate hub accessory connected to the TV but intended to sit near devices normally connected to televisions. In essence, it’s a box with numerous ports that simplifies access, eliminating the necessity to suffer the act of reaching behind the display to add or remove sources. Similarly, the Odyssey Ark comes with two dedicate remote controls, one that looks and operates like a standard remote, the other a solar-rechargeable unit revolving around a dial and directional pad controls. 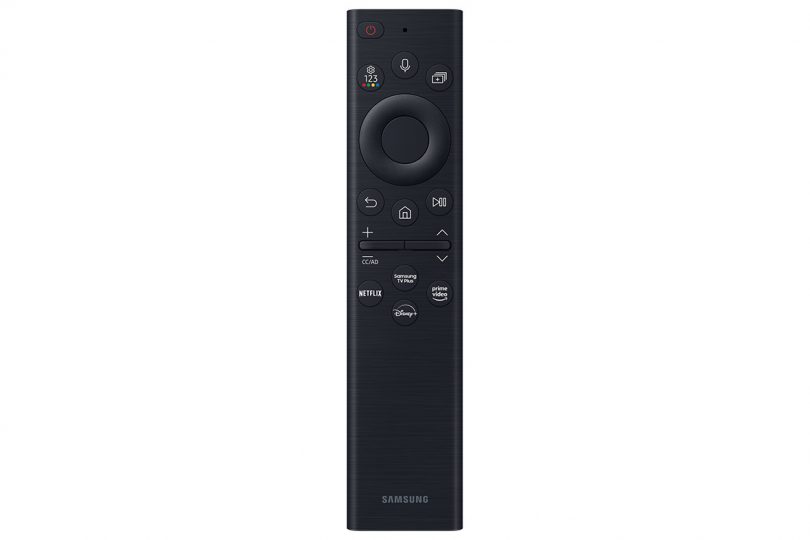 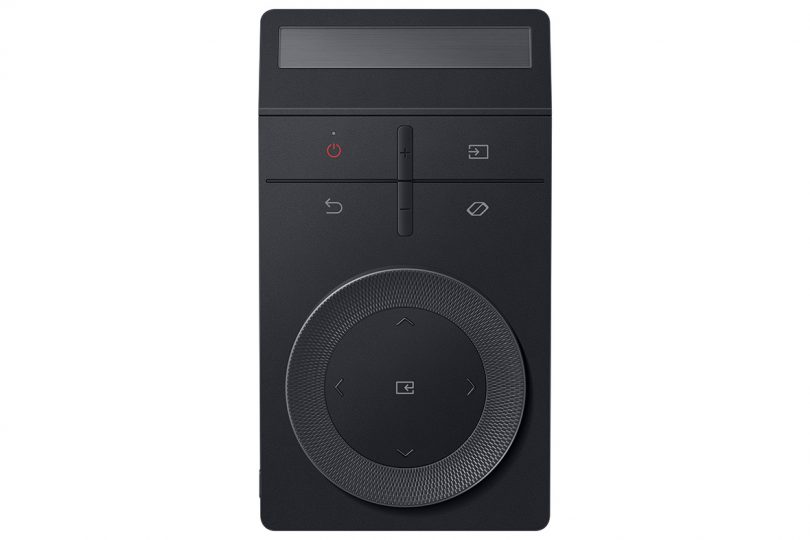 Additionally, owners of a monitor as large as most HDTVs will likely want to enjoy all of its glorious screen real estate for the occasional binge or movie night. For this purpose Samsung has outfitted the Ark with a full Smart TV experience via Wi-Fi using a collection of built-in streaming apps to simplify switching from computing or gaming mode into a something akin to a traditional HD television. 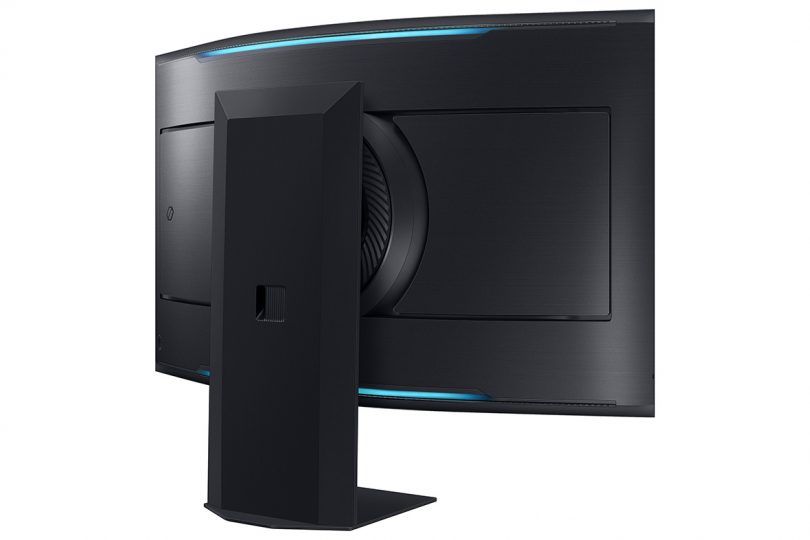 Do we need the Samsung Odyssey Ark? No. But does anyone really need a $3,500 4K 55-inch monitor, whether it be for gaming or other more productive endeavors? But ask us if we want one, we’d simply reply, “the heart wants what it wants.”

This post contains affiliate links, so if you make a purchase from an affiliate link, we earn a commission. Thanks for supporting Design Milk!

Gregory Han is Tech Editor of Design Milk. A Los Angeles native with a profound love and curiosity for design, hiking, tide pools, and road trips, a selection of his adventures and musings can be found at gregoryhan.com.